Jupyter Notbooks have been a popular technology in the Python data science community for a while now, especially in academics. Jupyter Notebooks are a way to mix inline, executable code with documentation in a presentation format. Best practices in organizing source code are not always the most efficient at communicating it’s functionality to a user.

While the intention of a programming language is the abstraction of computational complexity into a simplified language humans can read and write, they must always weigh toward the efficiency of the primary interpreter, the computer. Jupyter Notebooks are intended to communicate source code to humans first and computers second. We can use Jupyter Notebooks to communicate to humans not only the source but the interpreted result.

Jupyter can use a growing number of interpreters (called kernels) to run and render output, including my favorite, Golang.

Although data science expressed in Python is the first and most popular use of Jupyter Notebooks, I see a lot of other beneficial applications, including:

Beyond the ability to execute code in-line, the most useful features to me are exporting these notebooks as Markdown. Site builders like Jekyll and Hugo use Markdown to generate beautiful static websites and blogs. 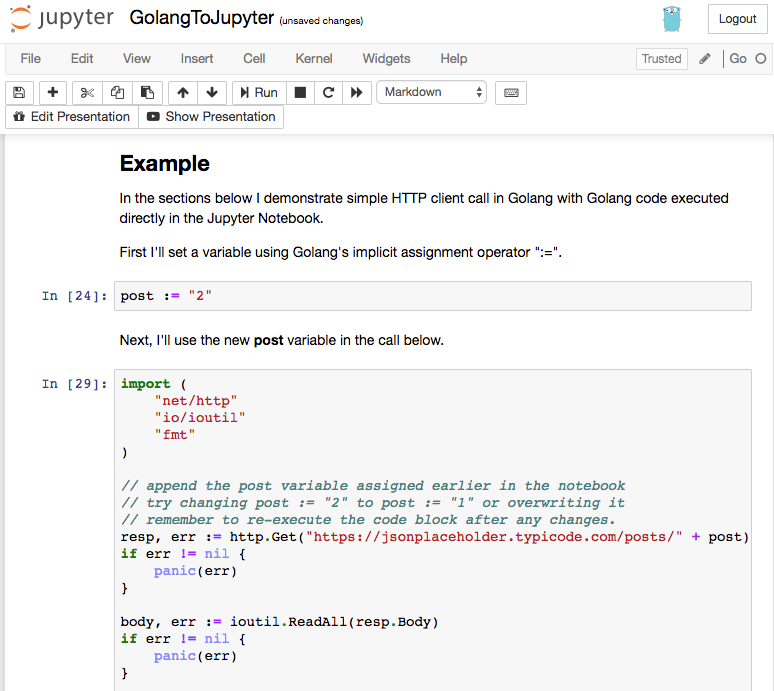 In the sections below I demonstrate simple HTTP client call in Golang with Golang code executed directly in the Jupyter Notebook.

Next, I’ll use the new post variable in the call below.

If you are reading this article on https://mk.imti.co then what you see here was exported from Jupyter Notebooks on my Mac in the Markdown format and saved to Github repository for this site. https://mk.imti.co is a static website automatically generated by Github using Jekyll. 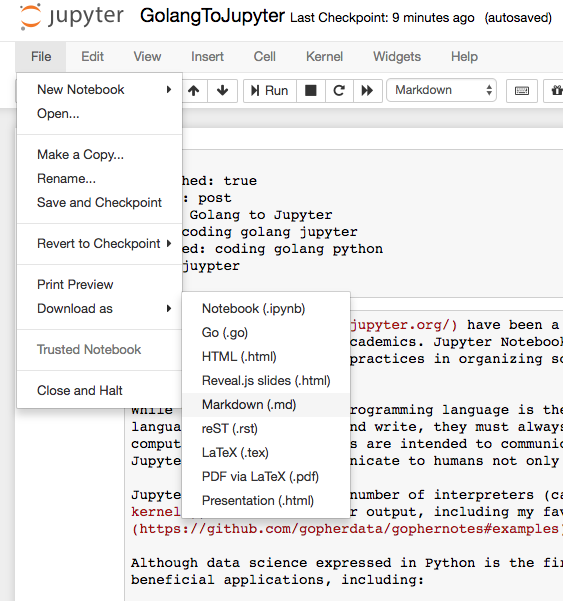 Although I could easily save this Notebook as HTML, site builders like Jekyll and Hugo use Markdown to transform the content into the structure and style of my site. Markdown along with a sitebuilder allows me to present the notebook in a format that fits my site. Other options include:

You can run, modify or extend this article in a Jupyter Notebook server on your local workstation.

Getting Started with GO in Jupyter Notebooks

NOTE: Your path to Go source may be $GOPATH/src and not ~/src/.

From a directory containing (or will contain) your notebooks, run:

This will fire up a Jupyter Notebooks server running on port 8888. You should be able to browse to http://localhost:8888/

You can test out the gophernotes Golang kernel by downloading and altering this article here.

Golang to Jupyter: Golang with Jupyter Notebooks by Craig Johnston is licensed under a Creative Commons Attribution 4.0 International License.